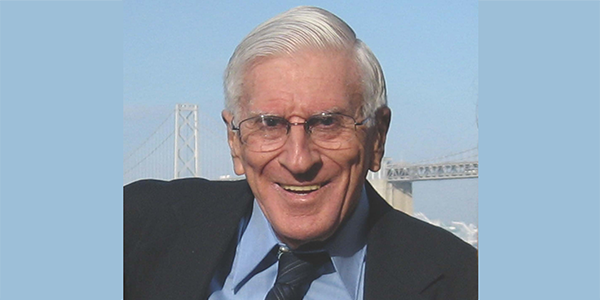 When Keith Wilson Loring '46 attended Webb School of California in the early 1940s, he acquired more than an education. He became part of something larger than himself, an extended family.

Loring's own father died when he was only five months old. His stepfather's sister was Edith Tyndall, Thompson Webb's secretary, and she helped Loring get into Webb on a "work program," whereby he did odd jobs around campus to help cover the cost of his tuition. This was the earliest form of financial aid at the school.

Many years later, Keith described his experience at Webb to his classmates:

"When I was a student, no one ever knew that Pappy took a big chance on me by giving me a full ride. He treated me with the same respect as he treated each of you and had equally high expectations. Together, each of us learned about leadership, honor, and loyalty, lessons that became embedded in my core."

Loring passed away on May 8, 2017, he was 88 years old. In his final act of appreciation to the school, Keith kept a promise he made to Thompson in 1949 when he wrote in a letter, "You are all wonderful to me, and I'll never forget it. I only hope that someday I'll be in a position to help other needy students, as you did me. Let's wait and see ..."

This summer, Webb received news that Loring bequeathed a share of his estate to Webb, capping a lifetime of generosity towards the school including 64 lifetime gifts beginning in 1960, when Webb first began fundraising efforts as a nonprofit organization. The estate gift will be added to the Keith Wilson Loring '46 Scholarship Fund, which was founded in 2011 to provide scholarship support for Webb School of California students. Loring actually had the pleasure of meeting the first Loring Scholar, Brian Christensen '15, via Skype and the two bonded immediately.

"This gift reflects one man's love of an institution, and his profound gratefulness for the opportunity to experience an education that set him on a path for life," said Taylor Stockdale, Head of Schools. "As we approach The Centennial, Keith's commitment to financial aid endowment insures that others just like him - smart, motivated, and above all, honorable - will enjoy the rewards of a Webb experience."

At Webb, Loring described his masters as "father figures." He was especially close to Ray Alf who was his mentor and track coach and from whom he learned important lessons about endurance, mental and physical toughness, and risking failure to achieve success.

Loring later attended Princeton University where he also "worked his way through" at odd jobs that included waiting tables in the dining hall, and working the ticket booth at football games. He went on to work for the National Life Insurance Company in Miami, Florida, for 46 years. Loring was a prostate cancer survivor and leader of several prostate cancer support groups where he spent more than a decade helping men cope with this pervasive disease. He fancied himself an amateur standup comedian and performed his jokes whenever possible. Keith is survived by four children: Scott, Bruce, Grant and Catharine.

Webb was always dear to his heart though. In 1949, Thompson Webb wrote a letter to the President of the Rotary Club of Coral Gables, Florida, offering to help Loring receive a scholarship for his final year at Princeton: "Loring entered this school [Webb] in September 1943 in our sophomore class and spent three full years here, graduating in June 1946. He made a splendid record in all respects. Loring is a very ambitious young man - an exceedingly hard worker. His behavior with us was always above reproach and deserved our highest recommendation. In his senior year, we were very much pleased with the strong stand which he took on the right side of several exciting issues in the student body. He showed leadership and personal courage which aroused our admiration very much."

In an email to the advancement office Loring wrote, "My personal values and code of ethics are all based heavily on my three years at Webb, and they have served me well over the years when confronted with 'easier but always incorrect' solutions to various problems."

Loring embodies Thompson Webb's hope that his graduates would carry with them always, "the fundamental principles of character and the highest ideals of right living ..."

With this gift, Keith Loring '46 upholds his legacy as a leader, not an ordinary man, and makes it possible for others to follow in his footsteps. Pappy Webb would be proud.