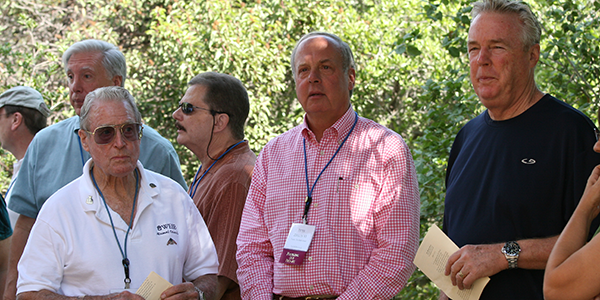 Very few people have served the school in greater capacity and with greater leadership and care than Peter Ziegler. A trustee of more than 20 years and a former board chairman and president of the Alumni Association, we owe Peter a huge debt of gratitude.

As a Webb student, Peter was a two-year honor committeeman and a varsity athlete in tennis and football. He served as an editor of El Espejo and received a National Merit Scholarship Letter of Commendation. After Webb, Peter attended Yale, served as a line officer in the U.S. Navy, and then went back to school to earn his law degree at USC.

Peter practiced law in the Los Angeles office of Gibson, Dunn & Crutcher for 34 years retiring in 2008. He specialized in corporate securities and business matters, public and private financings, mergers and acquisitions and general corporate matters. Peter was the co-managing partner of the office for 10 years. In addition to selflessly serving The Webb Schools, Peter has also served on the board of trustees of the Los Angeles Philharmonic Association and the Southern California Chapter of the National Multiple Sclerosis Society.

Peter and his wife, Cheryl, have given generously to Webb for five decades including participation as leadership donors in the past three comprehensive campaigns. At Alumni Weekend 2013, Peter celebrated his 50th reunion alongside more than half of his classmates. Once again, he set an ambitious goal and led the charge to raise money for the Class of 1963 Scholarship Fund established by classmate Dan Reynolds ’63, which is nearing a recordsetting $1 million with participation from numerous members of the class.

In soliciting his classmates, Peter noted the power of lifelong friendships as well as adherence to a set of common values that continue to guide each individual to this day. “Webb played an important part in our formative years and I think it was a contributing factor to the success we experienced later in life. As you could see at the reunion, Webb continues to educate young men and women in a first rate manner to become the successful leaders of the future. It is a cause worth supporting.”

Peter and Cheryl have generously made a bequest to Webb that will insure their giving continues in perpetuity. As a student, a professional, and in governance, Peter has exemplified the Webb School of California motto, Principes non Homines (Leaders, not Ordinary Men).