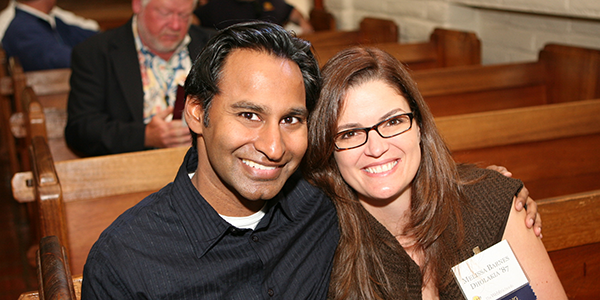 Melissa Barnes and Sanjay Dholakia would spend time together on lower campus between classes, practice, and other events, but they never dated at Webb. As students they shared a love of athletics and built a friendship that would eventually lead to romance almost a decade later when Sanjay, class agent for 1987, looked up Melissa and sent her a note via email in 1996. She was in Taiwan at the time helping to build a school system and they began a long distance correspondence. “I often say that we were the first Internet dating couple,” says Sanjay. They dated throughout graduate school with Melissa attending University of Oregon and Sanjay at Northwestern University.

On August 8, 1998, they vowed to spend the rest of their lives together. They were married in Bend, Oregon among family and friends. Sameer Dholakia ’91 (Sanjay’s brother) served as best man, with fellow Webbies, Steve Shenbaum ’88, Erin Smith ’87 and Carol Doody Willie ’86 in attendance.

Sanjay shares the following advice with today's students: “Make a mental note right now—think of the girl in your class—or maybe she was one class behind you or one ahead of you—that is smarter than you; that was ridiculously cute; that intimidated you so much you never asked her out. Then, in a decade or so, when you have found the courage, look her up—it just might change your life.”

In 2001, at Melissa’s urging, the Dholakia family (Sanjay, Melissa, Sameer, and their parents) created the Pravina Dholakia Scholarship Fund, an endowed financial aid fund to provide scholarship support for a deserving Vivian Webb School student. The fund was named in memory of Sanjay and Sameer’s mother. “My mother used to tell us ‘You can’t take anything with you when you leave this earth. The measure of your life is in the number of people you help.’”

Today, Sanjay and Melissa have two children, Maya and Kai and live in Bend, Oregon. Melissa most recently spent the last decade helping to establish and grow Lighthouse Community Charter School, a K-12 public charter school in Oakland, California where 89% of enrolled students are at or below the poverty line. As director of elementary programs, she was instrumental in securing prestigious federal grants for teacher development and compensation as well as private support from organizations such as the Bill and Melinda Gates Foundation. In 2013, Lighthouse won the Hart Vision Charter School of the Year Award in California.

Sanjay was the chief marketing officer of Marketo, having served as CEO of Crowd Factory, which was acquired by Marketo in 2012. Sanjay also serves as Board Chairman of The Webb Schools. Sanjay and Melissa have made an estate provision to support the scholarship fund they began years ago. In doing so, they represent a new generation of planned gift donors to Webb and are among the youngest members of the Thompson and Vivian Webb Society.